Join us at L’Auberge Chez François Sunday, December 15th, 2019 at 6:30 PM and get into the holiday swing with an encore sold-out performance of this very special musical Holiday Soirée Supper, hosted by Chef Jacques and his team.

Vocalist Bob McDonald and pianist Tony Nalker will celebrate the songs of the season and the life of legendary crooner Frank Sinatra with an evening of the most memorable songs from the singer’s film and concert performances. The program will be an evening of Sinatra classics worthy of any Rat Pack.

Bob McDonald is probably best known to the DC area as the National Anthem singer for the Washington Capitals hockey team. He also enjoys a diverse career across many artistic disciplines, including musical theater, opera, and the concert stage, as well as his job as an active-duty baritone and announcer in The United States Army Chorus. Bob has performed on most Washington DC area stages, including The Kennedy Center, Signature Theater, Folger Theater and others, and at various venues across the country. Bob received his BA and MA from Oberlin Conservatory of Music. 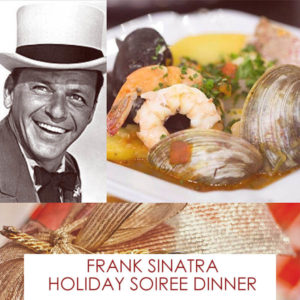 Tony Nalker performs widely in the Washington, D.C. area, currently serving as jazz pianist with the Smithsonian Jazz Masterworks Orchestra and the National Symphony Orchestra Pops. From 1989-2016 Tony was the pianist of the premiere jazz ensemble of the U.S. Army, the Army Blues, and served as the group’s enlisted leader.  Tony received his undergraduate degree in music from James Madison University and his M.A. in music from the University of Iowa.

These fantastic sounds of the season will of course be paired with an equally decadent 5 course menu, inspired for ol blu’ eyes, crafted by Chef Jacques Haeringer and wines expertly paired by our sommelier team.  Happy Holidays!

We are happy to accommodate guests’ dietary concerns, so all may join the festivities.  Please email chezlauberge@aol.com or call 703-759-3800 with special requests.

We're sorry, but all tickets sales have ended because the event is expired.