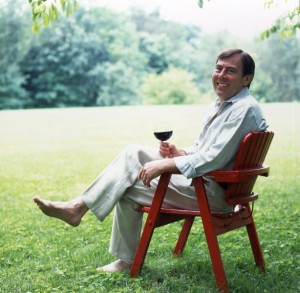 A beautiful day, great food, nice bottle of wine and maybe a little romance…how much better can life get? That’s Chef Jacques Haeringer’s philosophy – good food, good friends, a relaxing environment and tastes to be savored. For years he has been spreading that message to the thousands of patrons that flock to his family’s idyllic restaurant in suburban Washington, DC, as well as to the viewers of his syndicated television show and readers of his cookbooks.

As Chef de Cuisine of the legendary L’Auberge Chef François, Jacques is one of America’s most respected and innovative culinary personalities. Continuing in his father’s footsteps, Jacques specializes in reinterpreting Alsatian and French cuisine for American palates.

Jacques’ culinary roots began when his father Chef François Haeringer opened Chez François, an Alsatian restaurant in Washington, D.C over 50 years ago. Today, L’Auberge Chez François, now located in a picturesque country setting in Northern Virginia, is one of the metro area’s most popular and recognized restaurants. Jacques and his staff have won numerous awards, such as the coveted AAA Four Diamond. The restaurant has been voted Washington, DC’s “Most Popular” and “Most Romantic” by readers of Washingtonian Magazine for 22 years. 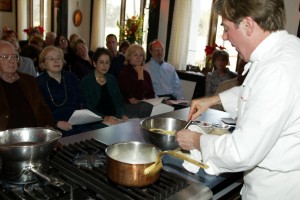 Jacques loves serving up classic and contemporary French fare at the restaurant, but with his boundless energy he can also be found teaching gourmet cooking classes, writing magazine articles, and appearing at cooking demonstrations and on television and radio shows across the country.

Among the numerous accolades he has received, Jacques was selected as one of the featured chefs at the 2004 Taste of Vail and was the official spokesperson for Thermador’s line of gourmet kitchen appliances. His articles and recipes have been featured in Bon Appetit, Gourmet, The Gourmet Retailer, Wine & Spirits, Southern Living, Cosmopolitan, Better Homes and Gardens, and Cooking Light. Culinary websites such as SuperMarketGuru.com; SheKnows.com, ChocolateAtlas.com, and Chef2Chef.net have featured Jacques’ recipes and culinary tips. 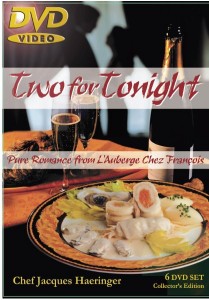 Jacques’ popular PBS cooking show “Two for Tonight”, aired across the country for several years and he hosted “A Bite of History” on the History Channel.  He has cooked up culinary delights on national television programs including The Today Show, CNN, Fox News, ABC World News Now, and The Victory Garden on PBS. Jacques can also be heard dispensing romantic tips and talking food on radio shows in many American cities.

Jacques is the author of “Two for Tonight,” a collection of recipes that inspire romance through food and togetherness, and the “Chez François Cookbook,” featuring the restaurant’s most popular Alsatian recipes. “Two for Tonight” and “Les Desserts,” a collection of the restaurant’s sweet indulgences, are now available on DVD.  Both books were inspired by their respective television series, and both the cookbooks and DVD series are available for purchase.